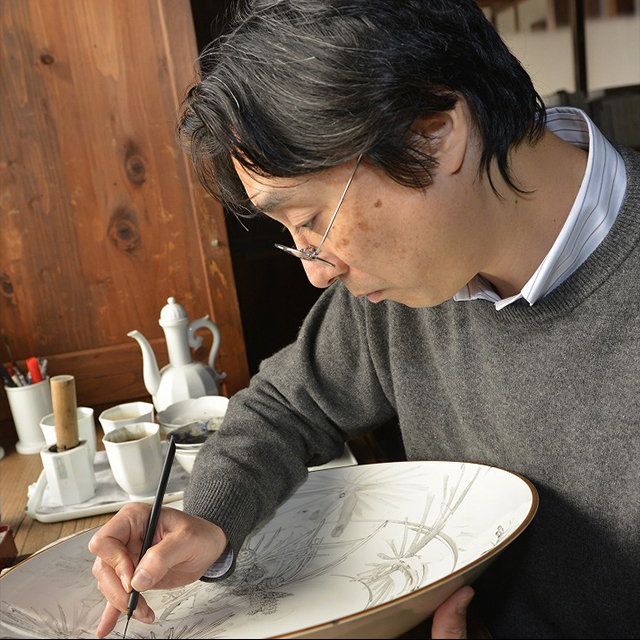 1991
Dropped out of the Department of Painting, Tama Art University

2012
Became a member of the Arita Ceramic Art Association 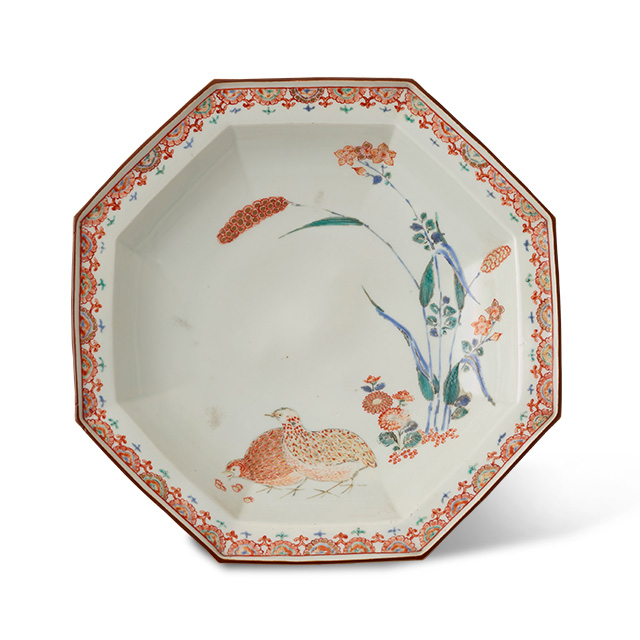 With expanding export market demand in around 1659, production of porcelain decorated with overglaze enamels in Arita greatly increased. As a result, skills for mixing white and flawless porcelain clay rapidly improved. It was at this point that polychrome overglaze enamel decorated porcelain with elegant and brightly colored  pictorial designs on a milky white porcelain body was born. This style was established in the 1670s, and is known as the classic ‘Kakiemon style.’
Kakiemon style polychrome overglaze enamel porcelain was highly valued not only in Japan but also abroad. Kakiemon style porcelains were exported widely and in great quantity to Europe through the Dutch East India Company (VOC). Nobility and the upper classes of the period coveted this new style of elegant porcelain, and some even squandered their fortunes in order to adorn their residences with Kakiemon style porcelain.
Kakiemon style continued to be the most popular type of overglaze porcelain created in Arita until the end of the 1690s. During this period, classic Kakiemon style was made on milky white porcelain bodies, and on porcelain with a slight bluish tinge, as well as porcelain decorated with underglaze cobalt blue designs. Today these types of porcelain are all grouped under the broad category of Kakiemon  style.

The water that remains after uncooked rice is washed is called nigoshi in the Saga area dialect.

The term Nigoshide refers to a milky white porcelain body that glows with a warm tint, and is reminiscent of rice-water. Nigoshide is unique to the Kakiemon Kiln. Nigoshide is made from raw materials harvested from Izumiyama, Arita in a special combination with an original process. While white porcelain usually sports a blue tint, Nigoshide porcelain has a soft milky white sheen. Nigoshide was invented in the 1670s as the perfect porcelain body that would compliment the brilliant polychrome overglaze enamel colors created by Kakiemon. High quality flawless porcelain bodies continue to be created incorporating improvements discovered since the initial Kakiemon style was first established.

The harmonious beauty of a milky white body decorated with elegant, brightly colored overglaze enamel designs was highly valued not only in Japan but also abroad. Kakiemon style porcelains were exported widely to Europe through the Du tch East India Company (VOC) since 1659.
However, Nigoshide ceased to be created in the middle of Edo period (18th century) owing to difficulty of obtaining raw material and the elaborate production process. After a long period of absence, Kakiemon XII and his son Kakiemon XIII successfully reproduced the original Nigoshide by carefully studying family archival documents passed down in the family during the Edo period. In 1971 the Nigoshide technique was designated by the Japanese government as an Important Intangible Cultural Property and continues to be highly regarded around the world today.

The Nigoshide technique has been inherited by Kakiemon XIV, who has further developed the potential of Kakiemon style porcelain by fusing this warm white porcelain body with innovative designs inspired by nature found in the neighboring  Aso and Kokonoe mountain areas.

From Saga Airport
By car: 75 minutes

From Fukuoka Airport
By car:
It takes approximately 90 minutes to the Hasami Arita I.C. (Please use the Kyushu Expressway, the Nagasaki Expressway, and the Nishi Kyushu Expressway), then a further 12 minutes to the Kakiemon Kiln.
By train:
Fukuoka Airport to Hakata Station on the subway  service takes approximately 5 minutes. Change at Hakata Station for the JR Express to Arita (the train ride takes 80 minutes). The Kakiemon Kiln is located about 7 minutes away by car from Arita Station.

From Sasebo Train Station
Please take the JR Express from Sasebo Station to Arita (30 minutes). It is a further 7 minutes by car from Arita Station.

Please note that there are numerous imitations of Nigoshide  style, polychrome overglaze enamels and underglaze cobalt blue Kakiemon porcelain. When you do not purchase a Kakiemon porcelain directly from the Kakiemon Kiln, affiliated branch, a registered dealer or department store, we ask that you take extra care to ensure that the work you purchase is a true Kakiemon piece.